Isabelle and I are very excited to release our next single. We Are Not Alone was initially inspired from a day spent on the water whale watching last September as part of a birthday present for Isabelle! While we where out there the magnitude of the animals in the water, and the sheer vastness of the ocean all around us and the seemingly infinite horizon really made an impression on me. Perhaps this was due to spending so much time inside over the past couple covid years.

As our ferry returned from Vancouver Island and the city of Vancouver slowly began to appear as a tiny dot on the shoreline I was hit again with the scale of the world and how self absorbed I had been over the past decades. All my life was contained in a dot on the horizon and seemed so huge while we were there. Yet the moment we left the city the whole world began to filter into my consciousness. After getting back that weekend Isabelle and I went into the studio and We Are Not Alone was born.

Peter Gabriel has been a big personal favourite of mine from his first solo album (I wasn't as big a Genesis fan as I was of his solo output). A few summer's back I rediscovered his records and was really re-impressed with the moods and style of those first three. I think the most obvious inspiration on our song is the big low single-note piano bass with its heavy chorus effect. That helped set the tone and stateliness of the song. As with many of our songs I programmed a drum part to run the length of the tune. However as soon as the arrangement took shape I knew I had to get my pal Leigh Grant to drum on it. 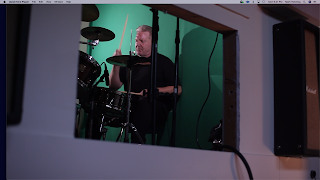 Leigh and I go back to Pure days together and he's been kind enough to play on several Combine songs over the years. He brought his trusty Gretsch kit into the Boutique Empire studio and we spent a very efficient day tracking on We Are Not Alone and another song which shall soon see the light of day. 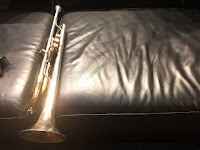 Replacing the programmed drums with Leigh's drumming was quite the energy shift but I will add that Chad "Felix" Taylor's trumpet really sealed the deal! Felix came in one night back in February and we had a blast building up a horn section for the outro of the song.  He was replacing some rather dodgy horn samples I had put in to give the direction and as this is the very first time we've added live brass to a song I am overwhelmed by the energy his playing added. Certainly something I will want to do again! 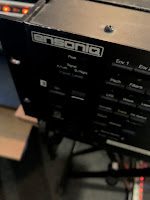 In a funny side note I did also squeeze in the same brass section sample that I'd played on Pure "Spiritual Pollution" back in 1992.  It was a bit hit or miss that the Ensoniq ASR-10 sampler would still boot up (and it didn't manage to read a couple of the first syquest drives I tried) but the venerable floppy disk came through in the end. Maybe it's silly but I think there might be some magic to those sounds and I'm glad that sound made it onto the song. (I believe they were the absolute final bit of recording for the single).

We Are Not Alone was mixed right here at the Boutique Empire studio and wonderfully mastered by this space's former occupant Ryan Dahle over at his new studio on Mayne Island. His analog approach really shined up the song and I'm very pleased with his work.

If you've made it this far into the post then perhaps you can do us one more thing. Below are pre-save links for the single. If you use one of the streaming sites below please click thru and pre-save the song into your library. It apparently helps greatly with the algorithm and enhances out chances of being offered for more popular playlists. Plus it ensures you get to hear our new track!

Thanks for reading and hope you like the song and video on July 8th! 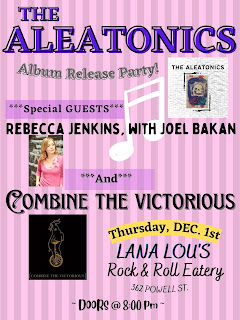