We are pleased to present our new video - Crumbling Hearts.  It's comprised of footage we captured while exploring Stockholm on our day off in that lovely city!   Even in the drizzly October weather we were quite taken in by it: a beautiful place with exceptional people.  Great crowd too!

Big thanks to the staff of Bonden Bar, especially Adnan who treated us so well.  Of course our friend Erika deserves special praise for setting up the showcase and getting us to commit to coming to Sweden.  We look forward to returning, hopefully next year.

In the meantime we are excited to debut our latest adventure on video.  Please share if you enjoy it!


Thanks for watching, cheers!

P.S. if you are a music supporter and would care to download the song it is available at iTunes as well as many other sites and our own bandcamp page as well.
on October 30, 2012 No comments:

We just got back, but we're still buzzing from being in London.  Our show with the Club Fandango guys was brilliant.  The whole evening was entertaining, every band on the bill was great.  Big thanks to everyone involved and the fantastic audience on the evening.

Buffalo Bar couldn't have been more convenient for us.  We were staying with our friends, the incomparable Baz and Ings, who lived a mere ten minute walk from the club.   Even though I was nursing a severe hangover on the day, the excitement of performing in London soon wore that off.

Our set for the show contained every song from the new Crumbling Hearts ep as well as a new cover of the Donna Summer's classic "Hot Stuff."  This was the very first 45 that Isabelle ever bought, so it's a bit of a rite of passage for us to be playing it now.  We have to give thanks to our friend Kym Brown who so kindly videoed the show on our tiny camera.  The following video clip is that night's performance.


We both felt very honoured by the overwhelming reception from the audience and the other bands.  It was a fantastic night, we stayed right to the end as all the other bands were so good!  Big thanks to everybody in Bat and Ball, Sister Gracie, Animal Noise, the staff of Buffalo Bar, and the folks of Club Fandango.  Couldn't have had a better introduction to London!  Cheers!! 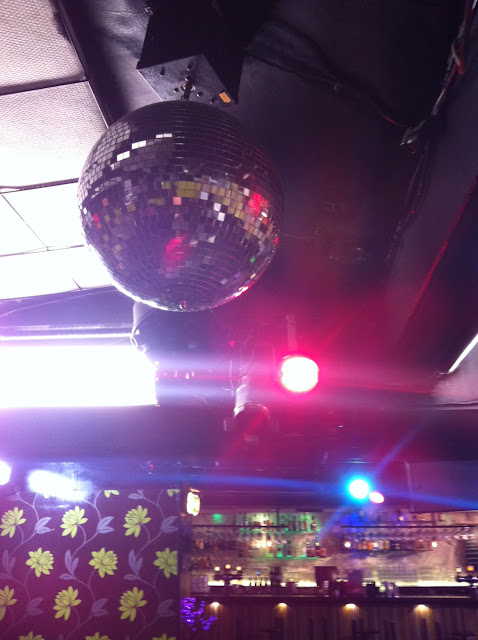 Next up is our show at Buffalo Bar in London.  Gonna rock that one too!  Then it's back to Canada to prepare a west coast tour.
on October 21, 2012 No comments:

Behind the Scenes of Crumbling Hearts


Here is a little interview, behind the scenes look at the writing and recording of our new five song EP Crumbling Hearts.  Video shot, edited and directed by Stefan Sigerson.

Takk to the multitalented Stefan Sigerson for putting this clip together for us!

CtV vs. Ryanair: or 14kgs to poverty!

Our first week in the UK was a family filled adventure that took us from Northwest London area, up to Lincolnshire and then down to Kent where we took in the stoney beaches, the lovely pubs and the white cliffs of Dover.  Wednesday we got up early, boarded a train and made our way to Gatwick airport for our flight to Stockholm and our first show in Europe!

I will confess that I had a scheme for this tour that involved travel "light" and simply.  We booked our flights to Sweden with Ryanair, the infamous budget airline of Europe.  It was at the check in counter that we just discovered the illusionary pricing of said airline.  Having paid only £16 (each) for our flights to Stockholm we were feeling pretty chuffed with the deal!  Interestingly enough we had the foresight to actually prepay our baggage for the flight (at £30 for one bag - each way!).   So I reckoned we were kinda set, with perhaps a small overage fee because we were both using the same bag and had some of our gear in it too.

Let us just say the Ryan Air is very very stringent about their 15kg baggage fee.  We had in fact topped out at 29kg!  I was surprised we were that far over the scales and even more surprised that the small fee that I had imagined we might be charged for the excess weight turned out to be £280!!  The clerk did offer us an option though.  He suggested we go and buy a second bag and pay a second bag fee.  We quickly went over the small kiosk around the corner and purchased a cheap bag, well it looked cheap, but in fact cost £20 for that too!  Then we played the weight distribution game.  Three times back and forth to the counter to get each bag under the 15 kg allowance.  It seemed an easy thing to do but in fact proved quite challenging.  Some of our stuff was long and couldn’t fit into the other bag.  Then we had to keep shuffling things between the bags until we hit the magic number.  They were gracious enough to allow us 15.2 kgs on our large bag without any extra fee.  The second bag now weighed in at 14.2 kgs.

They take their baggage fees very seriously at Ryan Air.

Thankfully we had the foresight to print up up our tickets and boarding passed before we hit the airport.  Ryanair charges a blinding £15 for being forced to do that labour for you.  I suppose paper and printers are far more rare in Europe than North America!

Budget travel is an misnomer.  The low ticket price gets you interested, but your credit card will die a death of a thousand tariffs!

However, we got through and had a nice pint of London Pride and on our way to Stockholm as I type this.  Our travel plan’s budget has increased somewhat, but we are on our way!

We have saved money with this flight compared to using a larger carrier, but the difference has become very marginal.  I guess that’s just the way it is with these things.  One for the books to be sure!

We’ll let you know how things go in Scandiland soon enough.  Then it’s back to Blighty for our first UK shows.  Fingers crossed.

thanks for reading.  take care. 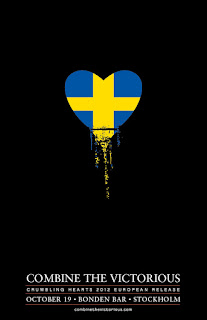 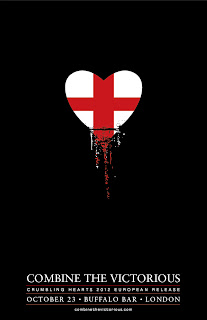 The official release date for the Crumbling Hearts EP is October 19th, it will be available worldwide thru all popular digital stores and streaming services.

Big thanks to artist Robert Edmonds for his poster designs once again.  We both loved these the moment we saw them!  He's also assisted us with our promo cards for the tour as well.  Everything just seems so important with his art.

We're both very excited about these shows, our first time playing in Europe and a first time to see Stockholm.   Look forward to writing more about our adventures!