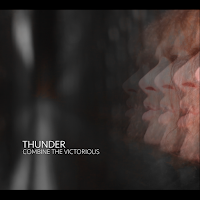 We have been writing away these past 18 months or so, trying not to let the time escape us during this Covid 19 era.  Back in the summer of 2020 Combine ran into our friend Rob Darch, who gifted us an anniversary present of a recording weekend at Hipposonic studios. Hipposonic is located in the exact studio space that was once Little Mountain Sound  (world famous for records by Metallica, Bon Jovi, Aerosmith... Pure and countless other massive hits).  Isabelle and I had started several new songs but weren't too sure which were the ones we wanted to record so I made the decision to go for broke and record as much as possible over that August weekend.

We loaded up with 6 songs, ranging from the very moody track we are releasing this week (Thunder) to some dance numbers and a couple out-right rockers which have kinda fallen behind.  It was a fun session with two different drummers, a violinist, a trumpet player and everyone from my folkband Farmteam coming in to sing backing vocals on an unreleased song called Canada (maybe we'll hear more about that song someday). We blasted through everything as quickly as possible but I knew we weren't going to capture complete records on that weekend.

Going back home I had a harddrive filled with tracks and some inclination of how things should go. A couple songs just didn't seem to grab me on further work and one has morphed into a dance track called Bold Universe. We also tracked the live drums for the song Love Ballad. Three others are in the undecided pile for now and may or may not make their way to completion.

Of all the songs we recorded on that session Thunder has been the most clear cut on how to proceed. The song was created from a simple voice memo that Isabelle made one afternoon. She shared it with me and it hit immediately. I listened once and then went downstairs to the piano and a song fell out of my hands. An accending chordal change section appeared without effort and suddenly we were both quite excited by the sound. It seemed very lovely and melancholic but with an underlying strength. 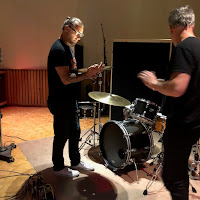 Back in that Auguest weekend at Hipposonic we had Jonas Fairley play drums to a basic demo arrangement I'd made at home. I confess on the weekend I loved what Jonas played but after developing the song to its final stage the drums we tracked were too epic and seemed almost prog-rock rather than the down tempo vibe the song evolved into. More about that later.  I then overdubbed a Yamaha C7 grand piano onto the new bed tracks. 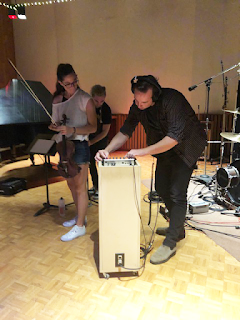 That same weekend we asked violinist Johanna Sö to come in a play a lead part in the outro of Thunder. She came in, set up, quickly got a sound and her headphones set up and we tracked it in two takes (she's very talented with excellent ears!), with maybe another pass to catch the little pizzicato part in the return to the A section.

Once we had that, Dan Blake dropped by that evening a put some electric guitar on the song. It's a gorgeous part that reminded me a tiny bit of something Cockteau Twins might have done. I love  how it lifts the B sections when it comes in. Very lovely and shiny sounding. 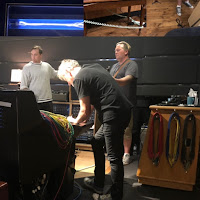 And then we were gone from Hipposonic and back to the home studio, for one last month: Isabelle and I had to move last year from the house we'd lived in for 25 years! An era ended and this new one has begun. I lost my studio at the house and thankfully found space in the Song City building in East Vancouver where we've been recording this past year.

Once we got the studio set up again we turned our focus first to the Love Ballad. I was determined to get that completed by Valentines day (it seemed significant) but once that was done we began forging new songs. I reviewed the work we had already started and Thunder came up sounding really good. We decided we should complete it so we'd have at least one other new song under our belt. Co-incidentally I was also working on Johanna Sö's debut album at the time so I became very familiar with her playing!

I think it was late spring when I felt Thunder needed some changes. We'd begun writing a pile of new material and the prog rock vibe was quite dissimilar to where we were headed. The drums stood out as the obvious culprit so I asked Dan Walker to come in and try doing something more controlled and quieter. After much work we found what we were looking for and the song was really taking on its final shape. 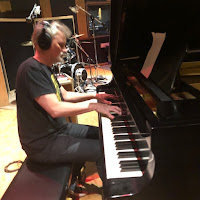 With the tighter drums the grand piano sounded too excessive so I did an old trick of side chaining a noise gate to trigger off a drum machine just playing on the three beat. Add in some cool dub delays (Thank you Lee Scratch Perry for your teachings - R.I.P.) and things were sounding very ambient and cool.  Pretty much everything was in place except for the mix, and so we mixed it.

I guess in the 21st century music needs to have a visual element to connect with an audience so we then took to the Pacific Spirit Forest up near the endowment lands of UBC and managed to film on a day that didn't rain! It is such a lovely part of the world and we are lucky to have such natural beauty so close to where we live. The little cameos from violinist Johanna were filmed in southern Quebec (where she and her fiance live now) and I struggled to make them seem congruous with the lush greens of our west coast forest but it all seems to work together. We are making music that spans North America!

Please check out the track and let us know what you think. It would be brilliant if you shared it or added it to a playlist as well, Everything helps!

Thanks for reading and thanks for listening.