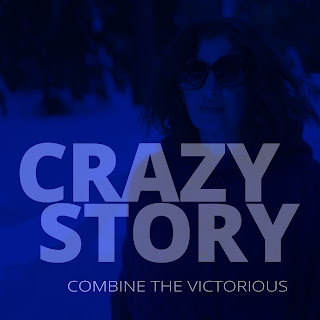 Crazy Story is one of the last songs that Isabelle and I wrote together over the winter. In 2021 we created an album's worth of material which we are this year putting together to release one song at a time. Our Love Is Stronger than some Crazy Story is probably the best collaboration the two of us have done since we began writing together in 2006!

In the Autumn of 2021 I was determined to create either a new song or at least a new loop everytime I went into the studio without a client. I had been studio maintenance and fixing things one afternoon and hadn't really done any creative work that day. However I had been listening to random songs on Spotify while I was cleaning up and I got inspired by the vibe of one song. Rather than simply copy it - which is of course illegal - I challenged myself to create something that felt similar but wasn't actually the same. It all started with a kick drum pattern honestly.  From there the beat came together pretty effortlessly and then a sort of skank guitar part was added with a descending line.  I doubled that with a keyboard part and an acoustic and it felt pretty good. Next I just grabbed my bass and played this looping bassline over and over until I found something that locked in. It's a bit different for me as it never really changes but it does suggest chord changes without actually laying them out directly.  I saved the session and went away for a gig with my folk band Headlong Hearts up in Powell River that weekend.

When we next came into the studio the following Monday I mentioned that I had a new idea to Isabelle and she said she too had something: a little voice memo she'd made on the weekend. I opened the song up and just copy and pasted my loop several times so she'd have something to sing over. I couldn't believe how well the two ideas went together as Isabelle had not heard my idea at all yet her vocal line fit perfectly with it! I was incredibly excited at the two ideas fitting together. 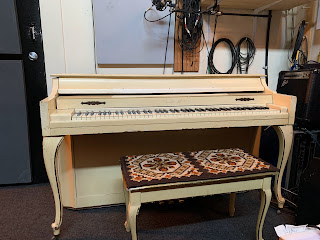 The last piece of the puzzle turned out to be my piano part. I have a small upright piano in the studio that I inherited from my friend Todd Simko after his death. It's a quirky little Baldwin piano, and sadly it had fallen out of tune quite badly over the decade from being moved several times.  It became a project for me to learn how to tune and I boldly made the decision to bring it up to A440 tuning (which it hadn't been for well over 15 years at least!). This proved a very challenging decision as I truly didn't know how to tune a piano and even though I could get it close in the evening by the morning the entire thing had drifted out again! I kept this up for nearly three months, each time getting different parts of the piano closer to being in tune but sadly never locking it up.  I did however discover that I was learning how to properly tune a piano by this time and took advantage of the time in front of the keyboard to figure out some nice piano lines.  I think it was around late June that I recorded something that didn't make me jump out of my skin from tuning issues!  The sound on the record is from back in July when I spent an afternoon doing takes and asking Isabelle's opinion of various lines. I'm rather proud of what we came to put together, probably the first time I've performed a piano part for the full length of a song!

The lyrics seem to have come from life itself as Isabelle had been diagnosed with breast cancer this winter. "Our love is stronger than some crazy story" just seemed so significant in light of her situation and her vocals are probably the best I've ever heard her sing.  And what makes things even better is that in August she has successfully passed through chemotherapy and surgery and is well on her way back to full strength! She is indeed stronger than some crazy story!

This song lines up with several other down tempo tracks that we recorded over the past year. I think it will be an important part of our repertoire for years to come and serve as a beautiful introduction to Combine the Victorious for a lot of new listeners.  Please let us know what you think when you give it a listen!